Last Sunday the Mayoress and I attended the Remembrance Service at Astwood Cemetery. This is an annual ceremony held a week after Remembrance Sunday to specially commemorate those who lost their lives in conflict and are in buried in the War Graves section at the cemetery. The event was organised by the local Royal British Legion, with the Worcester Sea Cadets taking part. Crosses were placed on individual graves, including Polish, Czech, and German servicemen who had lost their lives. I also laid a wreath at the small war memorial positioned close to the Astwood Road exit.

On Monday Paul Harding from Discover History, who played the role of Edward Hurdman (the first mayor of Worcester), joined me to officially unveil a blue plaque in his memory at the entrance to All Saints Church. This is the final resting place of Edward Hurdman and is also opposite the location where he resided as Mayor.

On Thursday I attended the White Ribbon Launch. White Ribbon UK is the leading charity engaging with men and boys to end violence against women. This is the start of 16 days of action to raise awareness to prevent violence before it starts. The event at Warndon Community Centre included stands from various agencies and charities from Worcestershire and the wider West Mercia Region promoting the various services they offer to either prevent violence from happening or help those who have suffered. At the event I signed the pledge to support ‘Time to Change Worcestershire,’ to change negative attitudes and behaviours towards mental health. 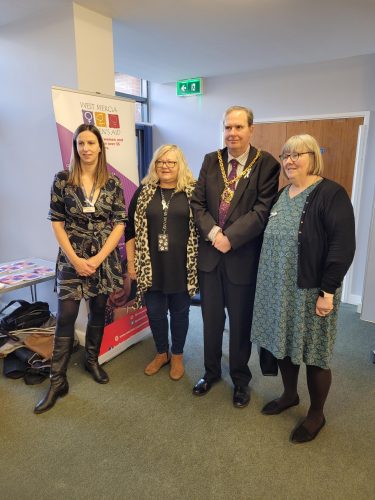 The White Ribbon event was organised by Ann Nicholls and her team from Worcester City Council, with the launch event chaired by Ruth Heywood from Worcester Community Trust. The launch event included a question and answer session from County Council’s Paul Kinsella and a short video was shown of a local woman who had experienced domestic violence that was both moving and inspiring.