Last weekend I realised how fortunate I am to be Mayor for this year, as the City celebrated the 400th anniversary of the creation of its Charter.

As I wrote last week, I had my portrait painted by children from Perry Wood Primary School and on Saturday morning I was able to view their pictures on display in the Guildhall, alongside other pieces of work created as part of their studies linked to the Charter Celebrations.

The events at the Guildhall included the play “400 Years of Worcester…in 39 minutes,” written by Kit Hunter and directed by Chris Jaeger.  I watched the performance alongside my dog Monty. Afterwards I made an address from the balcony overlooking the Lower Hall in the Guildhall, welcoming those taking part – including a number of history and heritage organisations. 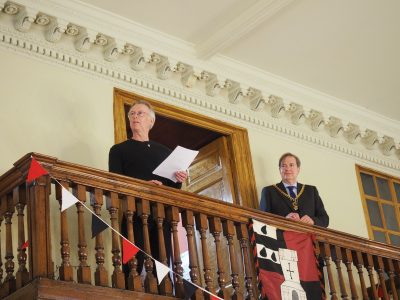 The Charter was read by Phillip Leach (who also was a cast member of the play); then Aleena and Leila from Perry Wood school read out their newspaper report about the Charter.

Later I was joined by past mayors of Worcester, including my wife the Mayoress, who was mayor in 2008/9, for a photograph and Civic Reception in the Assembly Room. Afterwards an organ recital was held in the Cathedral which included a work by Tomkins, dating from the period the in which the Charter was granted.

On Sunday the mayoress and I attended the Farmers’ Harvest Service organised on behalf of the Chaplaincy for Agriculture and Rural Life. During the service representatives from the County’s Young Farmers Clubs brought various products to be blessed at the altar and the address was given by the Reverend Mark Betson, National Rural Officer for the Church of England.

On Monday the mayoress and I were back in the Cathedral for a celebration and thanksgiving for the life of the Hon Lady Morrison DL. The service was attended by numerous dignitaries including the Lord Lieutenant of Worcestershire and the Chairman of the County, Councillor Steve McKay.  Music was under the direction of Adrian Lucas and featured the State Trumpeters of the Band of the Coldstream Guards.