Rarely have I been so touched by an impromptu mark of respect than when news of the passing of King’s School headmaster Matthew Armstrong, at the tragically young age of 48, broke this week.  The fact that at the time I was attending a cricket match at the King’s School ground made it all the more poignant.  Both teams halted their game without hesitation to observe a respectful minute’s silence, a tribute that I found intensely moving.  The fact that Matthew Armstrong and I were due to meet next week to discuss a whole range of topics also brought the news much closer to home. His loss will be felt.

At least there’s been moments of pure joy this week too, by way of compensation.

The Pop-up Café at St Stephens Church which I visited on Wednesday is a commendable initiative.  And later that day I felt I’d shed sixty years, joining in with the kids in all sorts of fun goings-on as part of Worcester Play Council’s National Play Day at Cripplegate Park.

Modest it was not – unlike the long-service presentation I made to Garston Phillips, who for 50 years has almost single-handedly maintained the Worcester City Museum in grand style: a modest man who wanted it kept low-key, while fully deserving the city’s most fulsome gratitude.

What can I say about the Worcester Festival which I formally opened at the weekend, that hasn’t already been said?  Chris Jaeger continues to display boundless energy by organising 504 events this year.  I wish that self-same energy had been displayed by my plastic duck in the annual St Richard’s Hospice race on Saturday.  I reckon he’s still floating somewhere downriver!

Another grand tradition took place on Sunday:  the Worcester Show, where it was a sheer pleasure to hand out prizes to the worthy winners. 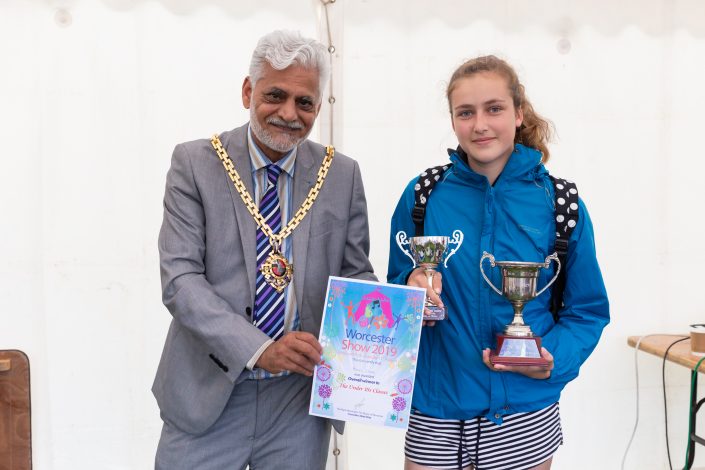 Last but not least, it was smiles all round from the faces of youthful Chinese children visiting Worcester from Shandong Province.  They tried out their media interview techniques on me, completing a week of mixed emotions that I’m unlikely to forget in a hurry.