‘Change’. That appears to be the theme of my diary in a week that even saw me in a Santa suit, white beard and all!  But more of that later.

The University’s carol service proved like no carol service I’ve ever attended before:  but then any event organised by Students’ Services and the Students Union is unlikely to conform and was all the better for it. Quite brilliant. Also diverging from the norm, the Rev. Ray Khan’s officiating at Bromsgrove Community carol service the next day broke every festive tradition in the book, fully deserving the same starry accolade.

Nor is my official Christmas card like any other in the past; its youthful designer, James Allison from Hollymount School, fully deserving his prize which I was only too happy to present in the Guildhall on Wednesday. 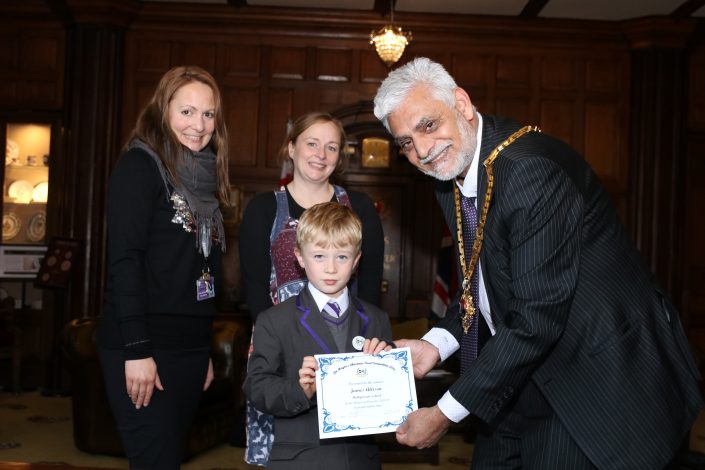 At least the King’s School carol service in the Cathedral fully restored the tradition of Christmas, to the evident delight of the sell-out audience.  Mine too!

Yet more change when a new chapter in Worcester’s incredible social history – or in this case anti-social history – burst on the scene with the launch of local author Bob Blandford’s book on the City and County jails in the Parlour – me playing my part by conducting tours of the cells in the darkest and deepest depths of the Guildhall.

And so to the man in the Santa suit… this was me aboard Worcester Lions’ Santa Sleigh, to be left me humbled by the generosity of people.

The Rotary Club accounted for most of my time over the weekend – from filling the bags for Christmas parcels, to delivering 540 parcels to residents of almshouses and elsewhere, followed by the traditional Christmas lunch at the cricket ground.

The week ended with me chatting to Chris Jaeger about changes to next year’s Arts Festival, followed by a reception for City Council staff who very quickly demolished my wife’s own special bhajis, pakoras and samosas –all making for a very joyful week.  No changes there, then!

A Merry Christmas to you all.