Summer has arrived, and last weekend Worcester was able enjoy two popular events that are huge part of the city’s summer calendar.

On Saturday morning I had the honour of opening the Worcester Festival, which runs until August Bank Holiday Monday. The event is in its nineteenth year and features 711 events across 57 venues, with most of these events being free. Chris Jaeger and his team have done a fantastic job organising this. I was thrilled to see the mascot Percy the Peacock on the High Street, joining in with the Worcester Ukulele club outside the Guildhall.

Sunday was also the anniversary of VJ Day.  I made a speech on behalf of the city which was released on video to mark the seventy-sixth anniversary of that event, and to remember the horrors of a war in which around 75 million people died. This can be viewed on Worcester City Council’s YouTube channel.

In the afternoon I had the pleasure of opening the Worcester Show, which has moved from its traditional home in Gheluvelt Park to Pitchcroft. The show included live bands, fairground-style attractions, a have-a-go sports zone and local food and drink. There were two marquees where judging of over 130 competitive creative classes was held, and later I did the honours by handing out the prizes. There was also a dog competition which Monty, our long-haired miniature dachshund took part in. The highly popular event attracted an estimated crowd of up to twenty thousand. 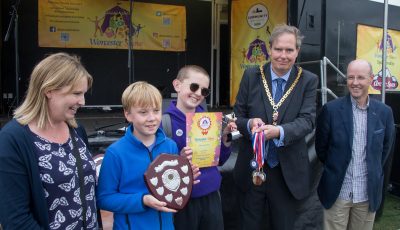 My final engagement this week was a visit to the Latimer Court care home off Newtown Road. Covid has not been an easy time for the care homes sector, and it was good to be able to meet the manager Lisa Riddle and her staff, along with some of the residents, for afternoon tea. Rachel Brady, the Activities Coordinator, told the mayoress and I how much she was looking forward to organising more activities and taking residents out in the minibus now the worst of the Covid pandemic was behind us.