My first comment is to congratulate all those A level, GCSE and BTec students who have received their exam results in the last seven days.  Unfortunately, some BTec students are still waiting for their results, and the method of awarding A levels was flawed to begin with, but has now thankfully been corrected.  I am sorry that this has caused problems for some students applying for University places and hope this will be resolved as best as it can be.   I remember what an anxious time it is waiting for exam results to come out, both as a student, parent and teacher.  This year our young people have had so much uncertainty and anxiety whilst waiting for their results and need our best wishes and support.

Last Saturday was a very special day in the history of peace and freedom.  The 15th August 2020 marked 75 years since the surrender of Japan and the final end of the Second World War.  VJ day is a day when we remember the sacrifice and bravery of our armed personnel in the Far East, who continued fighting after peace had been declared in Europe.  I was joined by Brigadier Roger Brunt who is the Deputy Lord Lieutenant, Mark Jackson who is the High Sheriff, Councillor Bob Brookes who is the Chairman of the County Council, Dave and Jean Waldron from the Royal British Legion, my Chaplain Sarah Northall and representatives from the armed forces and City Council.  A moving and meaningful act of remembrance took place in front of the Guildhall which was followed by a small parade to the Cenotaph outside the Cathedral where wreaths were laid.  I was proud to be part of this – thank you to those members of the public who joined us for this event. 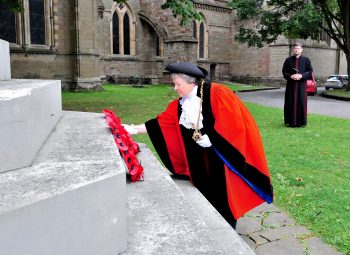 I welcomed two guests to the Parlour on Tuesday.  They are old friends who it was a pleasure to meet up with again; we were able to discuss support for events which they are involved with in the community.  It is always encouraging to hear about acts of support and kindness to each other, which is so badly needed in these unprecedented times.