There hasn’t been much time to sit down and reflect on my hectic whirl as mayor – but I did a bit of it this week, when I was permitted to sit in the actual chair that countless thousands of patients were strapped in and operated on at Worcester Infirmary, for the best part of 200 years. I can’t imagine what was going through their minds at the time, but I can say what was going through mine!  What a boost to tourism we could have if a medical history trail could be created taking in The George Marshall Medical Museum at Newtown, the old Infirmary in Silver Street and the newer one in Castle Street.  Watch this space!

Twinning:  now there’s another issue that Worcester excels at – and meeting the Twinning Association to hear plans for up-coming events proved illuminating.  Can you name all of Worcester’s twin towns?  Allow me… Kleve, Le Vésinet, Ukmerge, Worcester (Mass), Vernon and Gouzeaucourt, every one of which the city is proud to be associated with.

I’ve always taken an interest in Worcester Wheels, one of my mayoral charities, and it was a real pleasure to unveil another addition to its fleet this week. 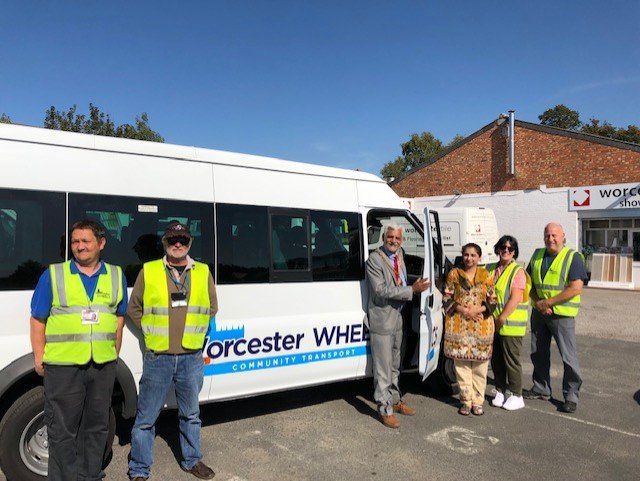 Then on Friday it was best behaviour for lunch with Worcester’s permanent judge Robert Juckes and the Chairman of the Bench for the swearing-in of six new magistrates.  I proved rather less buttoned-up at Worcester Arena later that day, when Worcester Wolves gave London Lions a right old seeing-to.  Nor was I especially quiet and sedate at the Rotary Club’s Harvest Supper and Barn Dance at Hollymount School – it was only the weight of the chain that kept slowing me down, honest!

An extra- special week in all, made even more hectic by celebrating 15 years’ success for Chris Partington’s Zebra Architects; starting the charity walk for the Oscar Appeal; attending the Hop Festival in the Hop Market; attending the Droitwich Civic Service; and going to the 101st birthday party of KGV Playing Fields volunteer, Biddy Furlong.  Whew…would someone please find me a chair?