Most weeks I look over the past seven days to decide what’s been the highlight.  This week I didn’t bother….they were ALL highlights!

Mid-week a most pleasant duty, handing over well-deserved National Citizen Service certificates to around 200 children.  Their tales fill me with admiration.

The Mayor’s Parlour twice became animated with foreign students this week: 26 Spanish estudiantes hosted by Tudor Grange, and then a few days later 20 more étudiants from Lille: did you spot how fluent je suis becoming in picking up bits of different languages there?

What’s to say about the City of Worcester Sports awards presentation at the Arena last Thursday?  In addition to Steve Cram and the BBC’s Dan Pallett as Master of Ceremonies, everyone there was a VIP – none less so than the sponsors who made it all happen.

The weekend proved all-go: six events back-to-back, each of which would have qualified as the highlight in any ‘normal’ week:  Guildhall Heritage Day; the crowds queueing to see the Guildhall give up some of its secrets (hectic); Footlights Stage School Open Day; being wowed by Tudor Grange Academy youngsters’ song-and-dance (brilliant, utterly); Pershore Charity Brass Band Concert in the company of civic dignitaries from all around (sparkling).

Bright and early the next day, I fired the starting gun for the 4,000 runners taking part in Air Products’ Worcester City Run (dazzling, as was the weather).  It was my loss that I had to miss the end, but it was all in a good cause – the unveiling of the Midlands Air Ambulance cardiac car (fantastic, not least as it will be stationed at Worcester to provide the fastest possible treatment for cardiac arrest victims).  And in the evening, the installation of the Reverend Dr Stephen Edwards as residentiary Canon at the cathedral (moving, intensely so). 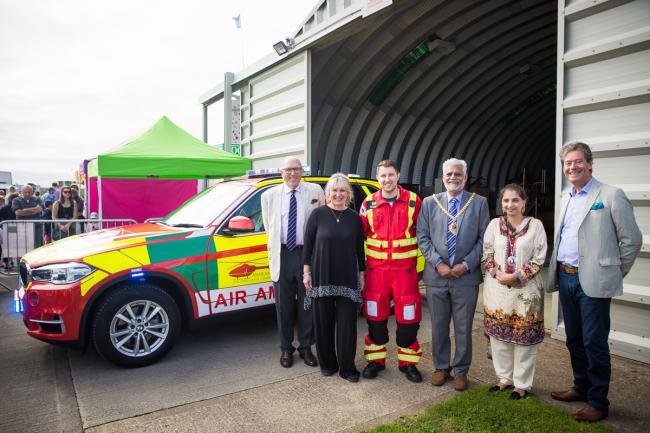 ‘Touched’ best sums-up my reaction to meeting the parents of tragic student Tom Jones who drowned in the river exactly a year ago this week. On Monday the Royal Life Saving Society installed new emergency equipment – a crucial addition to the riverside.