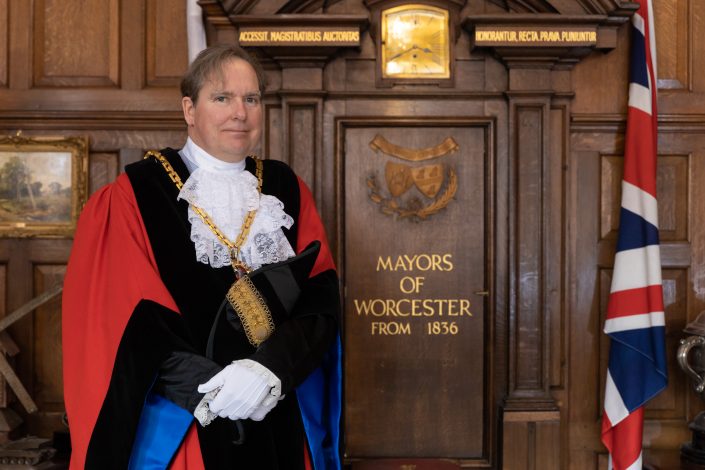 It is an enormous privilege to become Mayor of our great city, especially as 2021 marks the four hundredth anniversary of the Charter that created the role of the mayor an the three hundredth of the Guildhall, one of the most iconic municipal civic buildings in England. When I moved to the city just over thirty years ago, I never dreamt of becoming Mayor -and what a time it is, to become so.

The last fifteen months have not been easy as our lives have been put on hold due to Covid, and not only have loved ones been lost but we have not been able to enjoy the many pleasures that living in Worcester allows.  This is why the theme of my mayoral year is ‘coming back together to celebrate our great city’.  I hope that as the Covid restrictions are lifted, we can do exactly that.

The day before I became mayor at the Annual Council on 18 May my wife Councillor Lucy Hodgson, who is now the mayoress and a former mayor herself, were delighted to attend the civic banquet of the outgoing mayor Councillor Jo Hodges. I realise how lucky I am, as future events start to become reality – something my predecessor could not do.

On Saturday 22 June I took part in my first engagement as mayor attending the Civic Service for Councillor Kate Haigh the outgoing mayor of Gloucester. It was a privilege to sit in the quire at Gloucester Cathedral and hear the cathedral choir. I look forward to welcoming the Gloucester civic party in July when they come to Worcester for the opening of the Three Choirs Festival.

I have chosen two charities that mean a lot to my wife Councillor Lucy Hodgson and myself; The Stroke Association and ASPIE, a Worcester based charity helping adults with Asperger’s. Lucy had a stroke in March and is now making a good recovery and received support from the Stroke charity who have activities in the city. ASPIE, based in Sansome Walk was founded in 2011 by the late Sarah Micklewright, whose work is proving valuable to adults who felt particularly isolated during Covid lockdown.