Several times this week the thought has crossed my mind: ‘what a brilliant idea: now why didn’t I think of that?”

The first was on Friday when it was my pleasure to open The Kiln, a collaborative business hub initiative aimed at freelancers and business start-ups in what was the former City Police Station in Copenhagen Street.  Basing your enterprise in one of the old cells is now no longer a bar – ooops, no pun intended… oh, I don’t know though – to business success. A grand idea. 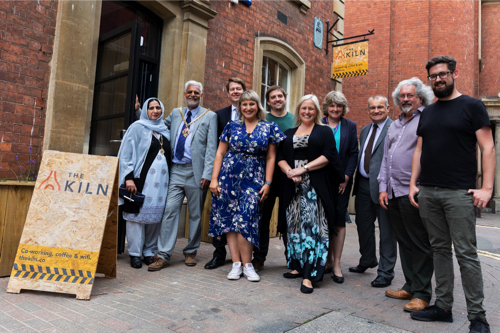 The second was attending Shedfest at the Arena.  Now, while I’m in favour of every man having his own shed for his personal me-space and blokey haven, this has nothing to do with garden furniture.  Men’s Sheds (https://menssheds.org.uk/) is a nationwide organisation committed to bringing men together to combat loneliness and isolation, using regular social interactions to learn new and improved skills through active participation in activities they enjoy.  I hear the organisation is growing by as many as nine new ‘Sheds’ a year.  Impressed?  Very.  So much so that I’m going to be pushing to get one set up in Worcester. Another grand idea that I wish I’d thought-up first.

Of course, September 3rd is a special date in the city’s calendar marking the anniversary of the Battle of Worcester – this year, the 368th – and the annual Drumhead Ceremony with a colourful march from the Guildhall to the Commandery is a pageant to behold. That it coincided with the announcement of some important Civil War ‘finds’ at Powick and that the main sites of the battle are for the most part in the ward I represent, gave this year’s event extra poignance, while underlining the importance of maintaining our colourful history for generations to come.  Pageantry is something Worcester does very well and I hope will long continue to do so.

The day had been marked with some sadness though:  a 4.00 am call to say that a remarkable lady had died.  This was Saeed Begum, who lived in my ward.  She was 109.