How to sum-up the week?  Chains and brains…

Where I go, the mayor’s historic chain of office goes too.  First, as a Senior VP of South Worcestershire, I visited the home of Rotary fundraising mastermind David Scott. Then I found myself in the company of leading physicists and educationalists for Professor Gary McCullough’s inaugural lecture at the University.  Sadly I had to leave early in order to make my third appointment of the day – a musical event in Birmingham, attended by a number of mayors.

More chains were on display the next day too, when I was honoured to be among 300 guests at Worcestershire High Sheriff Edward Holloway’s ‘At Home’ event at Lower Court, Suckley. Fundraising for good causes doesn’t just happen:  it needs brain power and planning, and his Charitable Fund is one of the most ambitious.

Worcester’s 150 year-old chain was once more proudly worn for the English Association of Male Voice Choirs’ annual concert in the Cathedral and, I have to say, its sheer weight kept my feet on the ground – such was the powerful impact of 200 soaring voices and three hours of magical musical enchantment.

Sunday saw a chain of a different type:  a BMW superbike handed over to the blood transfusion service by the Provincial Grand Lodge of Master Masons, at the Prescott Bike Festival.  The mayoral chain was once again brought out of its box for the 75th anniversary of D-Day in Worcester Cathedral.  There were lots of chains on show but where, oh where, was the public?  Lessons to be learned here about the power of publicity, I’m thinking.

In between all this, I received a 4.00am call with the painful news of the loss of a very good friend, Mohammed Walayat.

The week ended with a visit to Akina Homecare to celebrate its top CQC rating in the whole of UK; and presentation of an £8,000 cheque from the City Council to Footsteps –a local charity which provides support to bereaved families. 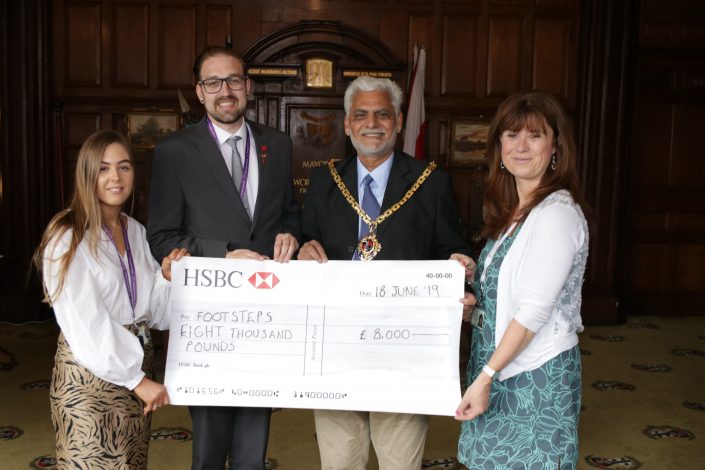 And still I found time to celebrate Fathers’ Day with my six children and 12 grandchildren.  Now that took brains!