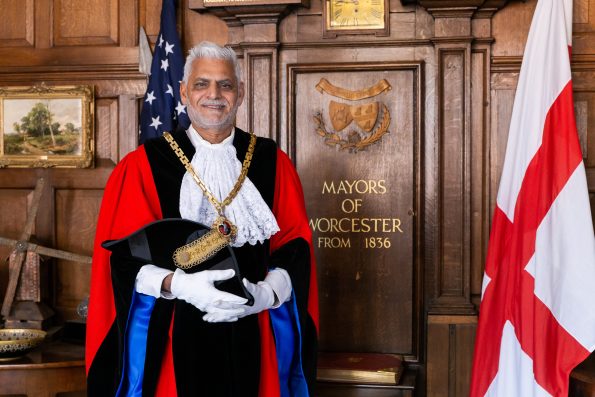 It’s with a mix of emotions that I write this first diary of my second mayoral term from the familiar surroundings of the Guildhall.

Pride, at being elected Mayor of this great city that has been home to me and my family for the past 52 years.

Joy, at being able to pick up some of the unfinished business I had started in 2004 but had been unable to complete during my first term as Mayor.

Hope that my vision for a more unified Worcester, a more cohesive Worcester, and a more open Worcester will unfold as each week passes in a year that holds so much promise.

Humility, of course, that Worcester has chosen its second Asian mayor in succession. I imagine that my wishes for Worcester and the wishes of you, its citizens, are largely one and the same, and it’s important to note that the role and traditions of Mayor are safe in my hands (on which subject, I am reliably informed, mine was the 777th and now the 792nd terms to date!).

All of which is coloured with perhaps a tinge of sadness: that there’s still a minority who feel it’s permissible to voice their hate messages behind the cloak of anonymity afforded them on the internet.

As Mayor, my aim, as of day one, is to foster a more open approach towards visitors, local and tourist alike. So if you’re in the Guildhall and you see my door physically open, then you can take it that my office is equally so.

In my first term back in 2004 it was shown that I had attended more events and raised more money for my charities than many of the previous holders – and that’s a tradition I’m keen to uphold. If they benefit my chosen charities, Worcester Headway, Worcester Wheels, our magnificent Cathedral of course, and St Richard’s Hospice, then so much the better.

This is going to be a great year for Worcester. I can feel it, and if you don’t already, I trust you very soon will.