I was delighted to join last Saturday’s emergency street collection led by Worcester Vigornia Rotary Club on behalf of the Disasters Emergency Committee Ukraine Humanitarian Appeal. This raised an impressive £3,026. This and other efforts around the city show our support for the plight of the Ukrainian people. 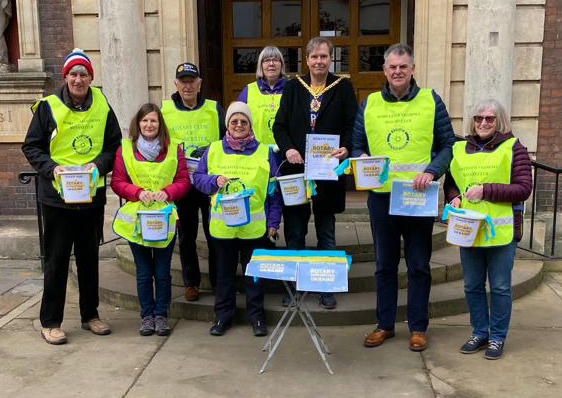 Last Sunday I attended the County Civic Service in the Cathedral. This is an important part of the ceremonial year for former Worcester Mayor and current Chair of the County Council Steve Mackay. The Dean, The Very Reverend Dr Peter Atkinson, gave a moving and thought-provoking sermon pointing out that age doesn’t always result in wisdom contrasting the optimistic and positive values held by young people in contrast with those of Russia’s brutal elderly dictatorship.

On Thursday evening I joined the City Council’s political leaders and members of the Ukrainian and Polish communities at the Guildhall to light candles prior to walking together to Cathedral Square for a vigil that was held at 7pm. The Worcester community came out in their numbers to this poignant occasion, which featured a piper playing the Ukraine National Anthem.

The youth are the future and yesterday, I attended the opening of the early years outdoor area at Perry Wood Primary School, then in the evening saw the production by the Young Rep of HUNT. This morning I was at the Royal Grammar School to attend the Worcester Competitive Arts Festival featuring young local talent in Music and Drama.

Later today (Saturday) I will be joining Worcester Ukulele Club who will be doing a five-hour gig in aid of the Disasters Emergency Committee at Bell Square in Crowngate.